What is a Chatelaine?
A Chatelaine is an officer who acts as a kind of liason between the SCA and the modern world. They help introduce new participants into the SCA by not only introducing them to experienced members, but also by teaching them about SCA and Kingdom traditions, customs and rules and helping new participants fit in. Chatelaines teach both formal and informal classes for new participants and have a wealth of resources that they make available to new participants, such as websites, pamphlets, handouts and SCA publications.
Chatelaines also work with teachers and other members of the local community to coordinate educational demonstrations by our members.  Educational demonstrations, or “Demos”, are popular in schools of all grade levels, Scout groups and many other kinds of social organizations. Demos help bring history to life. For more information about setting up a Demo for your school or group, contact your local Chatelaine.

What is the SCA?
The Society for Creative Anachronism, or SCA, is a legally chartered,
non-profit society whose aims are:

Most of the SCA’s activities take place within a social structure modeled and adapted on that of the Western European middle ages.  This allows participants to immerse themselves in the culture, arts, crafts, sciences, traditions, literature and lifestyles of the period.  The SCA defines its scope as pre-17th century, meaning that individuals recreate all historical periods up to the year 1600 AD.  In the SCA most of the world can be a source for personal inspiration, research and reenactment. Many members focus on the Middle East or Far East, though the core of the SCA focuses on Western Europe.

One of the things that makes the SCA different from Renaissance Faires is that the SCA is a participatory organization – there is no “audience” and no “performers”.  Everyone who attends an SCA event becomes both “performer” and “audience” by participating in the activities around them.   In the SCA you can learn to dance period dances, do calligraphy and illumination, make and fight in armor, sew period clothing, cook period dishes and do pretty much anything else that was done in middle ages and renaissance periods.  What makes the SCA different from a Medieval History Class or Humanities 101 Class is that instead of just reading books about things, you actually do them!

Some History of the SCA…
The SCA began in Berkeley, California in 1966 and has grown to become an organization with an estimated 100.000 participants with groups located all around the globe!  Every country that hosts a local SCA group is considered to be part of the “Known World”.  The SCA divides the Known World into 19 kingdoms, each ruled over by a King and Queen and a staff of Kingdom Officers.
The Kingdom of Trimaris is the SCA Kingdom comprised of the majority of the state of Florida (excluding the Florida Panhandle) and Panama.  Local groups are located all over the state of Florida.  For help finding your local SCA group, contact the Kingdom Chatelaine.

Links of Interest for New Participants 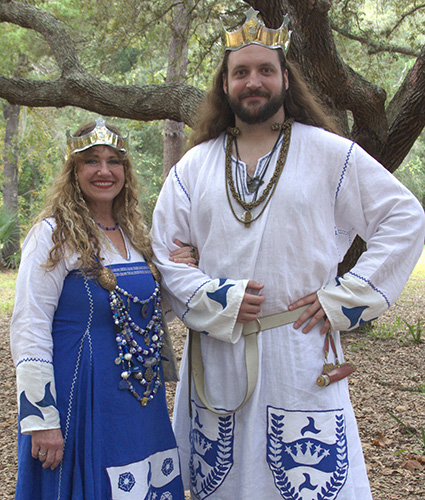 Unto the populace of the Known World, do We, Fasti Inn Hugprudti Davidsson and Elena of Grimsby, the King and Queen of Trimaris, bid you welcome to our wondrous Kingdom!